Store bought plums are picked prematurely so they ship well, but cannot compare in taste to plums picked ripe off a tree. This why we grow our own.

There are some issues with plums.

Japanese plums are generally too frost sensitive for our area and most years you will not get plums - spring frosts will kill the buds.

In fact, in 2019 I was fed-up and cut down all our Japanese plum trees. In the past 10 years, they only fruited twice. I have some European and Hybrid (Japanese x American) plum trees on order and will plant them in April 2020.

This will require patience since plums bear fruit in 4 to 7 years when self-rooted and 2-3 years when grafted onto some (not all) rootstocks.

European plums are hardy but usually get infected with the fungal disease 'Black Knot'. There are some exceptions that are resistant like, 'Bluebyrd', 'Early Italian', 'Mount Royal', 'NY9', and 'President'. Of these "President' is the most resistant. You may have heard of the 'Stanley' plum - it is the most popular European plum, but it is highly susceptible to Black Knot.

Removing infected branches as soon as you notice Black Knot is the most effective measure - prune off 6" beyond any black gummy infected areas. If you allow it to spread, it can kill the tree. See the photo below.

European plums are self-fertile, and one tree will produce fruit - however, yield will increase if two or more different varieties of European plum trees are present.

American plums (Prunus americana from the USA and Prunus nigra from Canada ) are hardy, usually scrappy bushes or trees that produce somewhat tart plums. However, they are great pollinators for Hybrid plums and should be planted along with your Hybrids.

Hybrid Plums combine the hardiness and disease resistance of American plums with the larger size and better taste of Japanese plums.

Hybrids (and American and European) will produce plums in colder areas like ours however hybrids often have sterile pollen. So, there are "pollination issues" with Hybrid plums.

For Plum trees, the best rootstock is Krymsk 1 (Cherry) - mature height is 6-10 feet, produces fruit early (2-3 years), and it increases the size of the fruit. Or grow the standard trees without a grafted rootstock. Myrobalan and peach are very popular rootstocks for plums but Cornell University has found these make the European plums susceptible to 'Brown Line Decline' from 'Tomato Ringspot virus' resulting in high tree loses. There are other rootstocks as well you can investigate.

Below are plums we either have, or are on order for planting in 2020.

As said above, Hybrid plums are often sterile, so you need a pollinator. American plums (Prunus americana and Prunus nigra) are excellent pollinators for Hybrid plums because their genes are compatible, and they have a long overlapping period of blossoming. Some specific Hybrids are also good pollinators for specific hybrids like 'La Crescent', 'Pamela', 'South Dakota',  'Toka', and 'Underwood'. Plant at least 1 good pollinator for every 3-4 Hybrid plum trees.

Hybrid plums are more hardy than Japanese plums. On our site, Japanese plums have not done well. In most years, the buds are killed by our unpredictable frosts. In the past 10 years we only had two good years of Japanese plums. So, in 2019, I cut down all the Japanese plum trees and am replacing them with Hybrid plum trees in Spring 2020. Hopefully these will do much better, but we will need to wait a few years to see.

​​"Japanese plums" originated on the Yangtze River in South China and were later introduced to Japan, Korea, Taiwan and Vietnam. So, for accuracy, the current trend is to call them Asian plums rather than Japanese plums - though the term Japanese plums is still widely used. 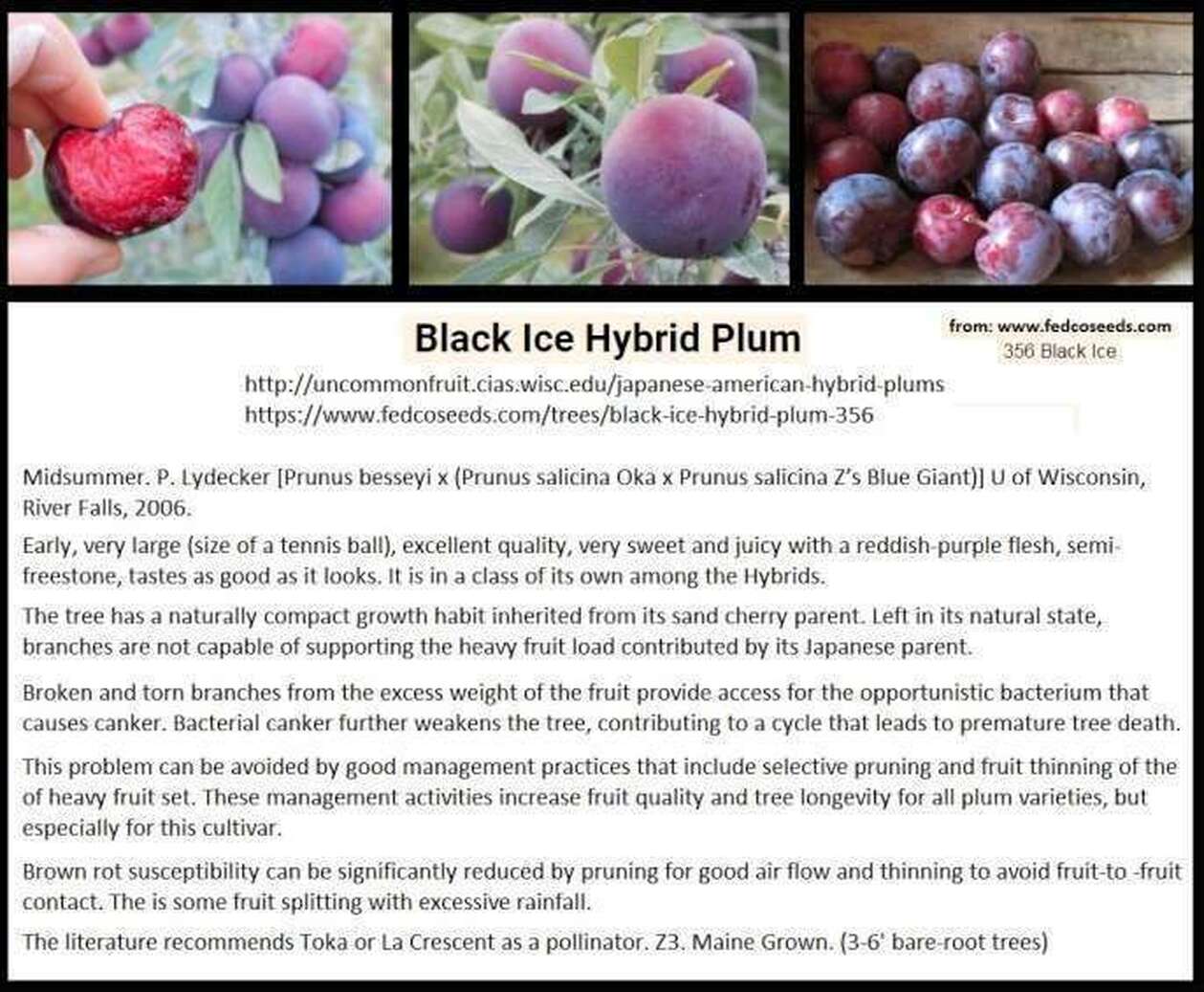 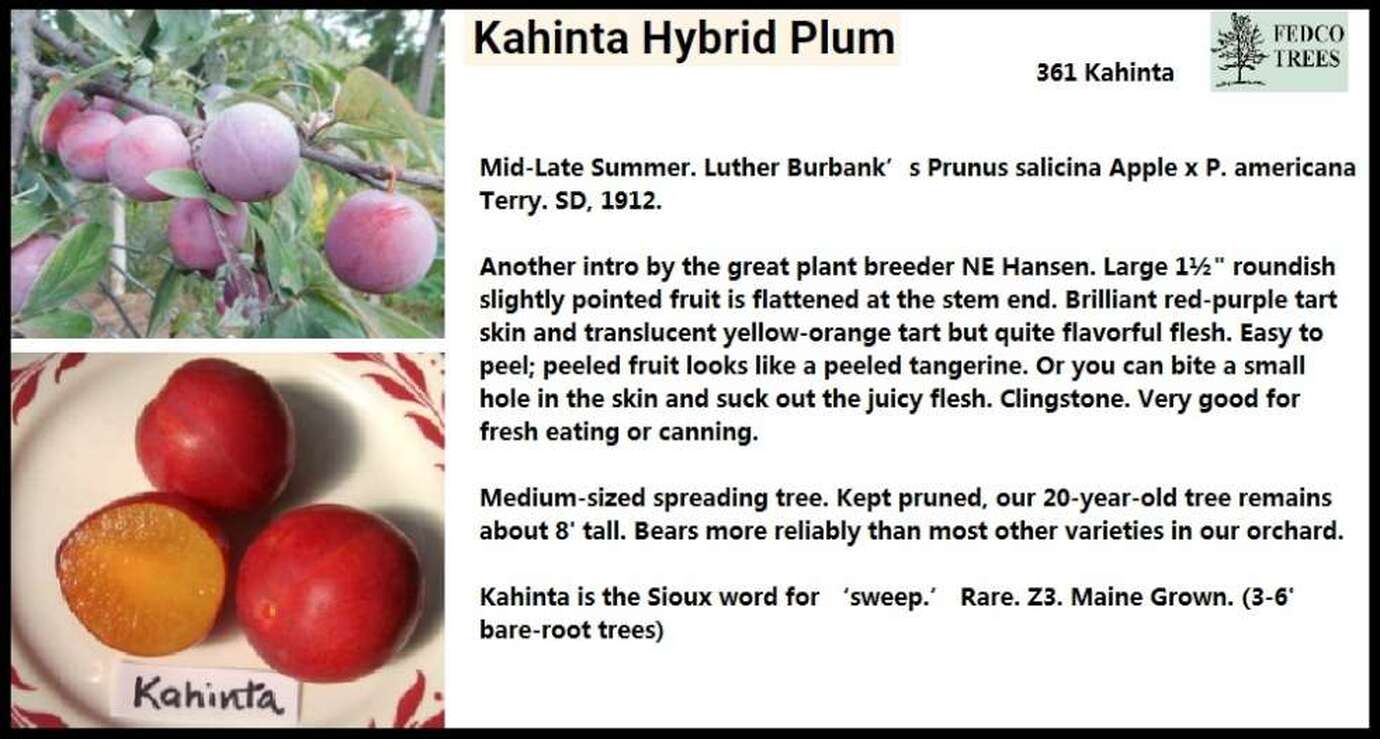